You can help make a difference today....

The monthly amount needed to sponsor a student is divided into shares - each share is $10/month. You can choose to be the child's only sponsor and select all of the shares, or you can choose a portion of the shares and another sponsor(s) will take the remaining shares. If you have any questions about the sponsorship program please email us at alongside.haiti@gmail.com and we will happily give you more of an explanation. 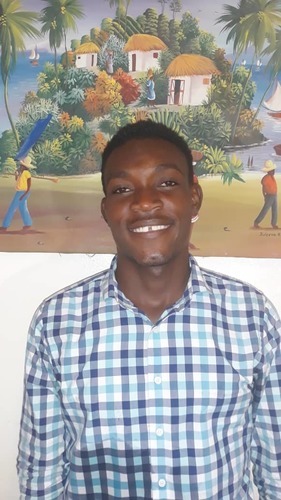 It was so much fun to interview Davidson, he had us laughing the whole time!

His three favorite things are playing the trumpet, playing soccer, and eating goat stew… if he gets to do all these things in one day he sleeps smiling.

Davidson is the tallest boy in his school… so tall that he often gets questioned about being a student by new staff members. He fondly recalls a time when he “allowed” a new yard supervisor to accuse him of trespassing and escort him from the school yard so that he could skip a test.

Davidson’s sense of humor is unique in Haiti and it shines through everything he does. Sometimes it gets him into trouble, but we think it’s a positive character trait that allows him to bring joy to difficult circumstances.

Davidson’s parents live in the mountain community of Tetebef and most of his seven siblings still live in the small community with them. Davidson is very bright and was so set on going to school that his parents had him move down to the city of Grand Goave when we was young. He lives with his Aunt and she helps his parents by paying for his tuition. School tuition increases with each grade and the cost is now too much for them to afford. Helping Davidson finish school will provide him with increased opportunities.

Davidson’s dream is to graduate High School, become a general mechanic, and have the ability to look after his parents as they age. It is our dream to come alongside him, and his family, to help that become a reality.